Menu
TAKE MY WORKSHOP
If you follow me you know Desmos is my go-to software for graphing and calculator functions with my students. I'm pretty excited to let you know that coming soon I'll release a 3 part video series on using Desmos in the classroom to enhance classroom discussions. To get started I wanted to share my favourite Desmos feature: The Moveable Point Watch the 1 min 44 second video: Can't see the video? Click here to see the post page. Sign Up below to get notified when the 3 part series goes live. You won't want to miss it!! p.s. Here are the activities seen in the video. The Great Collide Charge: Edited Sugar Sugar Pondering Percent Pentomino Puzzles Or You can also download the free Multi-Touch Book from iBooks to use on your iPad Beautiful Functions Since last week we did the 1/4 cup of candy corn today we looked at estimating how many would be in the big bag.

After all students had voiced their best guess and how many scoops it would be I showed the answer:

Today we switched strands from Saving & Borrowing to Travel and Transportation. They all got out an iPad and went to this Desmos Activity.

The first problem has students drawing a route from our school to a Tim Horton’s. I asked them to try to draw the shortest route possible.

This had them hooked. Each wanted their route to be the shortest.

As a class we moved to the next screen where we estimated the actual distance.  A student pointed out that the map image had a scale in the bottom right corner. A small section was labeled to be 200m. They used that to help estimate the distance for their routes. But we needed a better way to determine who would have drawn the shortest route! Moving to screen 3 we used the points to determine the “map distance” for each section of our route.

Students filled in a description of each leg of their route and the distance in map units.

We measured the scale at the bottom to create a scale factor for this map.

I demonstrated how to use the scale factor to determine the actual distances in metres and kilometres. We went around the room voicing how far our routes were to see who had the shortest!! Moving to the 4th screen showed what Google would say.

That was problem 1 out of 5 in this Desmos activity. We started problem 2 but did not finish it. Tomorrow’s work!!

Give it a try. I feel I’m missing some extension questions, or questions that dig a little deeper. Can you help me out and leave me some feedback in the comments? Thanks.

Warm up today was from Would You Rather: 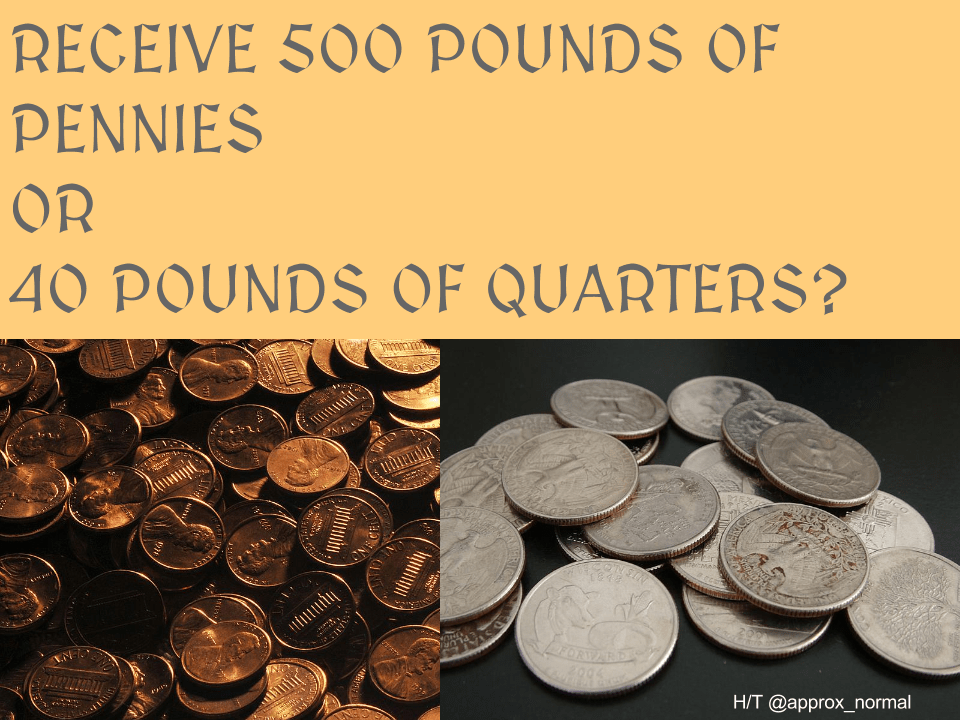 The groups blew my expectations out of the water on this one. They asked for the weights of the coins and then went to work.

One group looked at using copper pennies vs. zinc pennies in comparison to the quarters.

Most groups wanted the quarters regardless of the money…less to carry around.

We picked up where we left off from the credit card scenario bills. As we progress through the bills students saw what happens when you don’t pay off your entire bill. As a class we worked out interest charges added to the new bill, new statement amounts, and minimum payments for a variety of scenarios. We still did not complete all problems before class ended.

We brought up the Clock app on our iPads to help answer this problem. We reviewed converting times from the 24 hour clock and looked at timezones across the world.

Next, we worked on solving Robert Kaplinsky’s “Is Gas Cheaper With Cash or Credit Card” problem.

I showed this image:

Students noticed a variety of things including that gas here seems to cost more if you use a card. It was a no-brainer that they would choose to purchase with cash. Like in Robert’s lesson, I handed them a paper credit card and asked, “If you use this card does that change your mind?”

We discussed what cash back meant. Students worked on the boards to see if getting 2% back (2% off the price) changed their initial decision. They calculated this for each of the three gas types. I was caught up in good discussions with them and I forgot to take pictures of their work.

For the remainder of class they worked and submitted their credit card scenarios.

Warm up today was a Two Truths & One Lie:

I had two groups at the opposite end of the spectrum on working on these statements. The first worked on each statement and verified which was true and which was false! The other needed guidance for every statement.

Next up we are venturing into credit card land. I wanted to see how much they knew about credit cards beforehand so I put together this Knowledgehook Gameshow. Play along!

You can save this gameshow to run with your class here. You’ll need to have an account (they’re free) and then bookmark the gameshow.

Each question gave us some items to discuss about credit cards. We talked about best ways to manage them, what interest was, and budgeting.

If you’re new to Knowledgehook’s Gameshow you can create and run your own gameshows….but also access many pre-built gameshows ranging from grade 3 – grade 10 — All Ontario math curriculum.

I displayed an image of a credit card bill on our big sceren. We went through what different parts of the bill were for. I had a copy of some Visa Card statements I had used way back that were a pretty good resource. Each scenario had missing sections of the bill and the students have to fill them in. As a class we walked through problem 1.